Built on top of a part of what was once the Alfa Romeo factory in Arese, the shopping centre known as “Il Centro” has now been officially opened. More than just the largest shopping mall in Europe, “Il Centro” is a truly iconic building, which draws its inspiration from major international works, and forms a smooth whole, featuring squares and other common areas.

The architect Francesco Bollani, one of the Project Leaders and joint owner of Sviluppo Arese, took care of the urban planning and supervision of works for this massive project.

In this brief interview, he tells us about the most significant, interesting stages of the challenging project, for which Mirage provided the flooring materials.

We would like to begin this interview with one of the aspects we are most curious about: what does handling a project of this calibre imply, from conception through to inauguration, in terms of managing complexity?

The complexity of a project of this calibre is determined mainly by the overall duration of the project: 4 years from the initial design through to the inauguration. During this period, the real complexity was due to the changes that became necessary along the way: ideas and such that on occasion completely transformed the concept established at the beginning.

So to answer your question, the real complexity in the approach to a project like this is how to take on board the changes that are introduced along the way, which necessarily require a redesigning and reorganisation process that involves the whole project.

Remaining on the subject of planning and design, how is the layout of a shopping centre influenced by the style trends of the moment?

Generally speaking, it is not, or at least not in our case. This project was influenced by an innovative approach, i.e. the conception of a new type of shopping centre as a living space. Unlike similar facilities, Arese has been developed with an innovative structure: a huge outdoor area, from which visitors can enter the large corridor on the inside, representing an actual street, and the squares, a hallmark feature of the centre, designed as places where people can get together.

Thanks to all these innovations, the shopping centre is a place consumers are encouraged to spend spending much more time than in other similar facilities, and this in turn stimulates purchase.

So, to come back to your question, we’ve created trends rather than being influenced by them, and indeed many shopping malls in construction in Europe are following our lead, in the light of the innovations implemented and the success obtained.

Were there any particularly complicated moments while the centre was being built, any points at which problems appeared insurmountable?

The biggest problems typically arise about 60/90 days before the inauguration.

Generally speaking, the inauguration date of a structure such as a shopping mall is set during a meeting held about 3 years earlier, and the works are defined according to a timeframe that goes backwards from that date; but it is not until 90 days before that deadline – the time it takes for the fit-out of the individual stores – that the most important, urgent problems are inclined to arise, which in some cases mean the inauguration has to be postponed, because an inauguration with some of the stores still closed would cause enormous damage to the shopping mall’s image.

Taking a look at the project, what is particularly striking are the truly incredible figures involved. What can you tell us about that?

The numbers involved in this project are incredible, that’s for sure.

The photovoltaic system implemented produces 1.5 megawatt, sufficient to cover the energy needs of the entire mall.

Mirage’s contribution to this project consisted of a supply in excess of 60,000m2; if we were to lay all the porcelain stoneware slabs used end to end, they would cover the distance from your Pavullo office to Milan, just to give you an idea.

Let’s not forget either that the Arese shopping centre, having inherited the position of the historical Alfa Romeo factory, is entirely self-sufficient, with no connection to external services. The internal electrical power plant allows the structure to supply its own energy, and it can also produce its own drinking and other water thanks to a dedicated purification plant.

I imagine this structure is on the leading edge when it comes to ecological standards. Have you obtained the pertinent certifications?

Of course. The Arese shopping centre is one of the few commercial buildings of this size close to obtaining Leed Gold certification, which attests to the extremely low environmental impact and boosts the property value, which for buildings of this kind is extremely important.

Coming back to the materials used, what made you opt for the 20 mm thick Mirage slabs?

When choosing the flooring materials, we need to evaluate materials with a high mass and low maintenance (with low absorption, above all) in a relatively large size.

Mirage 20mm thick porcelain stoneware met all of these requirements, and the use of this material offered an immediate advantage during the construction work: large lorries and heavy vehicles were able to circulate freely at all stages of the construction process, without the need to protect the material. At the building stage, not having to adequately cover and protect the floors allowed us to save over €400,000.

This limitation of costs will continue, because 20 mm thick porcelain stoneware guarantees resistance and a suitable breaking load for the machinery that will also be used for maintaining the ceilings and the structure. The handling stage is just as challenging, and involves the use of heavy vehicles; this is the reason we did not even consider the use of materials such as parquet flooring or traditional-thickness porcelain stoneware, without forgetting the maintenance normally required for natural marble or wood floors, which over the years require polishing and protective products to be spread over them.

At the end of each project, you have to look at the results to decide whether it has effectively been a success. For a shopping mall, one indicator of success is visitor numbers. From this point of view, can the Arese shopping centre be considered a success?

Only time will tell, of course, but personally I would say yes, absolutely. After the inauguration day, with average visitor numbers of around 100,000, the mall has maintained an excellent level, with peaks of over 65,000 visitors recorded on Saturdays and Sundays. During the rest of the week, the figure is around 45,000, and the traders are extremely satisfied. So the results are excellent. 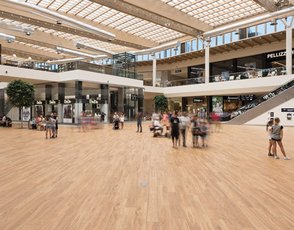 Arese Shopping Center. Inside the largest shopping mall in Italy. 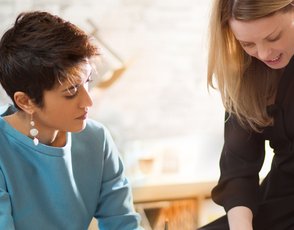 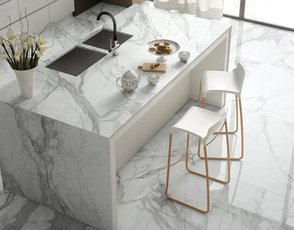 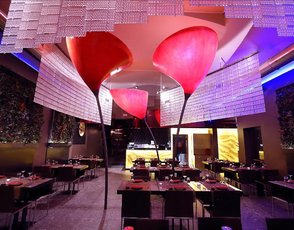 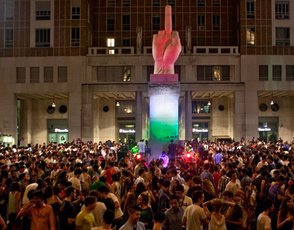 Francesco Morace at the Mirage Project Point: the paradigms of the post-opulence